The First winners of the National Arable and Grassland Awards have been announced!

The First winners of the National Arable and Grassland Awards have been announced!

The inaugural National Arable & Grassland Award winners were revealed last night in a prestigious ceremony at the London Hilton Bankside Hotel. With the awards highlighting and recognising all of the hard work and effort of our arable farmers from across the UK with the celebrations going long into the night!

Our legendary host Justin Moorhouse was centre stage cracking jokes and handing out the awards to all of our winners.

As part of our continued effort to support those who support the farmers we once again partnered up with our friends at the FCN (Farmers Community Network) and raised £1650 for charity.

Agronomist & Arable Farmer and Farm Contractor and Large Scale Farming publisher, Simon Lewis said : “A Fantastic night was had by all. Once again Congratulations to all our winners. These awards have highlighted the breadth and depth of talent, drive and ambition in the arable sector and it is a pleasure to recognise the hard work.”

Thanks go to the judges, the sponsors, the winners and to everyone who attended for making this fantastic evening possible. Here is to next year!

In Association with
AHDB
BASIS
NAAC 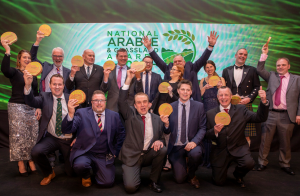